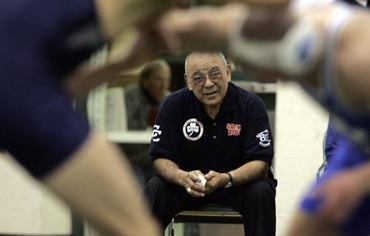 When Mike Rodriguez entered the doors at Detroit Catholic Central High School he had a resume that could've put him behind the helm of many collegiate programs. Rodriguez who grew up in Ann Arbor, Michigan went to prep school in Pennsylvania where he won two National Prep Championships. After successful stint in Pittsburgh, Pennsylvania, Rodriguez packed his bags and returned home to wrestle for Coach Cliff Keen and the University of Michigan Wolverines. While at the U of M, Rodriguez won three Big Ten Championships and was a two time NCAA finalist . After his successful college career Rodriguez, continued to wrestle on the international level. Rodriguez won an AAU National Championship and finished 5th at the World Championships in Japan. In 1960 Rodriguez was named an Olympic Alternate for the games in Rome. After a many bright years on the international scene the good lord had something else planned for the enthusiastic young man. High School Coaching....

Mike Rodriguez busted through the doors on 6565 West Outer Drive on a mission. Upon arriving at Detroit Catholic Central, Coach Rod had dreams of developing a dynasty, and that's exactly what he did. Within 2 years of arriving in Detroit, Rod accomplished his first goal of bringing home a team state title to CC. The Shamrocks under Rod defeated Lansing Sexton in 1969 and continued to roll the blue streak into the '70's. Rodriguez led the Shamrocks to a Three Peat, as the Shamrock wrestling team continued to win championships as they won Class A Championships in 1970 by defeating Pontiac Northern, and 1971 by defeating East Lansing. Rodriguez was the first coach in MHSAA history to coach a team to three Class A Wrestling State Championships in a row. In 1972 Coach Rodriguez, received the "Ring" as he was named National Coach of the Year. Rod went on to win four more state championships by claiming titles in 1974, 1978, 1983, and in 1988 the Shamrocks became the first team to win a state title under the team format (dual meet).

During his 40 year legendary career at CC, Coach Rod accumulated over 730 Dual Meet wins and retired as the winningest coach in the history of USA High School Wrestling.

Rod coached many successful individuals as well. He coached 18 All-Americans, 29 State Champions to 38 Individual State Championships, and over 125 state placers.

Successful coaches often refer to their team as a "family."

For Rodriguez, it's also literal.

Coach Rodriguez married his high school sweetheart June and they have been married ever since. Catholic Centrals first family also had many children involved in the program.

His sons Steve, David and Chris all wrestled at Catholic Central. Steve (1972) and David (1975) won individual state titles and went on to wrestle at Michigan State. Chris finished third at states and wrestled at Eastern Michigan.

His daughters Jackie, Patty, and Nancy where also very instrumental to the programs success serving as mat maids, cheerleaders, and mediators for their dads program and their band of brothers.

Coach Rod retired from Detroit Catholic Central in 2007. Upon retiring from CC Coach Rod was inducted into the Michigan Wrestling Coaches Hall of Fame. He spends his time now with his wife June and their beautiful family. In his spare time, Rod fishes, golfs, works out, and enjoys gardening and building things. Rod is still involved in the program as spiritual moderator and trainer.

The good lords plan for Coach Rod, proved to be an angelic one. "Rod" served as father, role model, mentor, spiritual advisor, and coach to over thousands of young men at Detroit Catholic Central.

We are forever grateful to Coach Rodriguez and his beautiful wife June!